Route servers provide multilateral peering between members IXP environment. Unlike the standard BGP peering, where everyone has to establish a BGP connection with each, the establishment of BGP Route Server allows the IXP members a service where is possible to retrieve all networks in IXP with only one connection.

Below is an overview how the Route Server work in CIX. 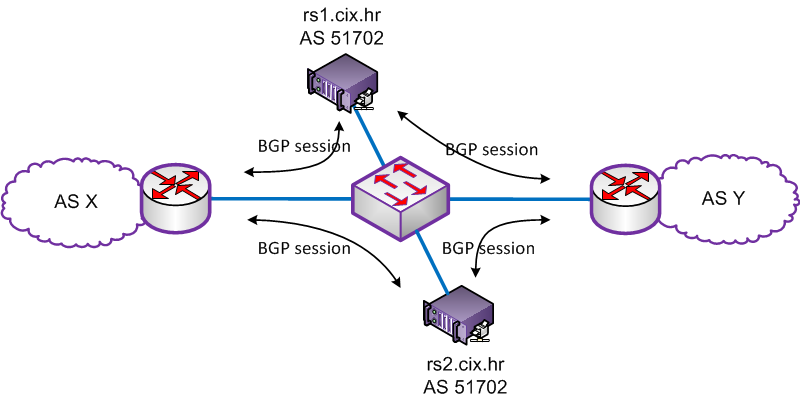 BGP communities for 32-bit AS numbers

To use BGP communities with 32-bit AS numbers, set ASN values as listed in the following table:

All advertised networks must be marked with some of the BGP community shown above.

If route is not marked by any of these community, than the route will not be advertised to other members.

If route is marked with more communities, some of which are contradictory then apply the following rules:

- the first it takes into account the more specific community (51702:ASN, 0:ASN), provided that the advantage has community that allows for route to be advertised (51702:ASN)

- route marked like this will be advertised only toward AS 65333

The list of AS and AS-SET objects, whose prefixes are advertised over route servers in CIX, can be found on the AS-CIX-ZG-RS object in the RIPE database.

- route marked like this will not be sent to anyone

CIX members that use direct peerings for route exchanging can also use the blackholing service.
Networks or hosts that they want to protect should be announced in a way that nexthop address is set to 185.1.87.3.

Resource Public Key Infrastructure (RPKI) is a cryptographic method of signing records that associate a route with an originating AS number. Presently the five RIRs (AFRINIC, APNIC, ARIN, LACNIC & RIPE) provide a method for members to take an IP/ASN pair and sign a ROA (Route Origin Authorization) record.

ROA (Route Origin Authorisations) is a cryptographically signed object that states which Autonomous System (AS) is authorized to originate a particular IP address prefix or set of prefixes.

RPKI validation of routing information has been initiated on route servers in CIX and invalid prefixes are filtered on route servers. The results are visible on CIX Looking Glass (https://www.cix.hr/usluge/looking-glass) - by clicking on 'Neighbor info' and entering the AS number. The validation results are visible in the second column of the view (ovs). They can be:

The 3rd CIX Forum was held in Srce on Thursday, November 17, 2022.
The forum discussed the operation of the service in 2022, user satisfaction and plans to improve the service.

A new addition to the CIX Policy "CIX Technical description and Service" has been published
29. 7. 2022.

A new addition to the CIX Rulebook ''CIX Technical description and Service'' has been published on the CIX website, which is valid from September 1, 2022.

The total traffic over CIX has been monitored since its inception and yesterday, May 4, 2022, peak traffic exceeded 100 Gbit/s for the first time.